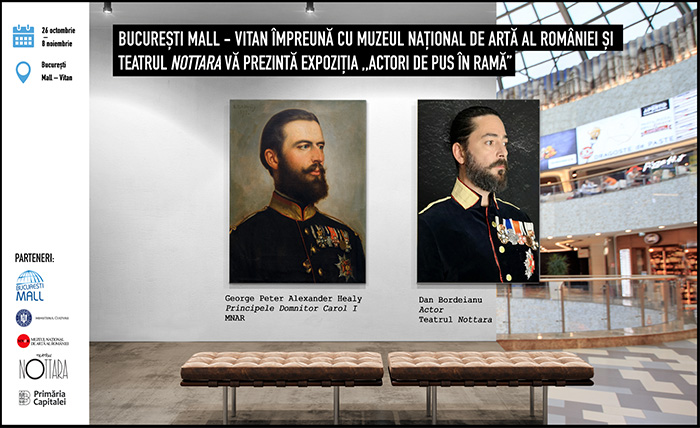 If you have visited us in the last week, we hope you have noticed the unique exhibition that we have prepared for you on the 1st floor, in  partnership with the National Museum of Art of Romania (MNAR) and the Theatre “Nottara”. If you have not done it yet, the exhibition “Actori de pus in rama” can still be seen at Bucuresti Mall until November 8th.

The 17 work of art bring us face to face with MNAR heritage, but also with the “interpretations” that the actors of the “Nottara” Theatre gave to the characters in those works. If you want to see Dan Bordeianu as Prince Carol I, Răzvan Banica performing a sculpture by Auguste Rodin or Mihaela Subtirica turning into Giovanna Spinola Pavese, don’t miss this exhibition!

Below you can find some of the stories of these amazing transformations.

Răzvan Banica, actor to put on the plinth.

Răzvan Banica is the only actor who did not have to play a character in a painting, but “The Bronze Age”, the sculpture by which Auguste Rodin changed the course of sculpture in the last decades of the 19th century.

Sure, we could now debate about Razvan’s choice to “dress” Rodin’s nude in his own reinterpretation; we know that many ladies would have preferred a more faithful reproduction of the original. Better talk about the fact that works by Rodin are now presented to the general public in  Bucuresti Mall.

Rodin is one of the masters of universal sculpture, whose sculptures we “hunt” when we go to the great museums of the world, but it is good to know, especially now, when it is much harder to travel, as in the center of Bucharest, at the European Art Gallery of MNAR, we find on display three works of the man who was the mentor of many generations of sculptors, including Constantin Brâncuși. 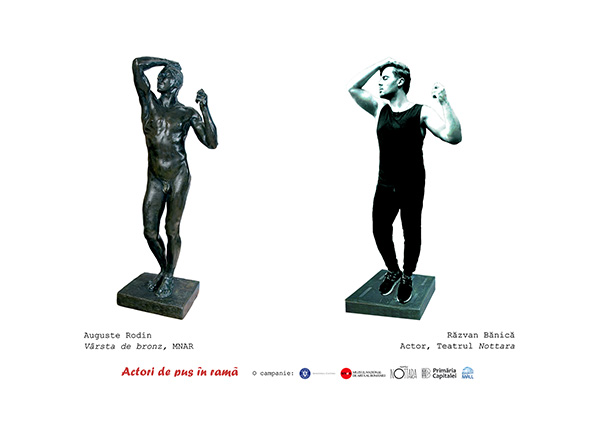 Mihaela Subțirică took her own picture

Speaking of great artists we may not have known to be in our country, the exhibition “Actori de pus in rama” also brought out Peter Paul Rubens, with a  life-size portrait of the artist Giovanna Spinola Pavese, made in 1606.

To make this spectacular reproduction, Mihaela Subțirică was a true one woman show. She made her own make-up, hair, and outfit (see aluminium foil sleeves and curtain collar). She nailed the wall and carefully hung roses in them. And, perhaps most impressively, she took her own photograph, using the timer function of the camera. 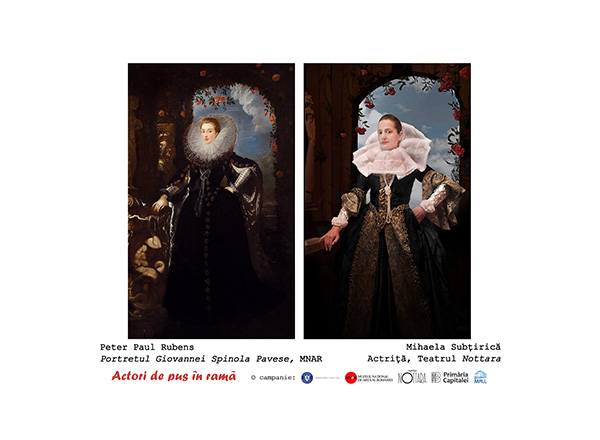 Ioana Calotă wears a Romanian traditional blouse reproduced after the one in the work “Revolutionary Romania.”

Each work selected for the campaign belongs to a different artist. And of the actors, only Ioana Calotă had two “roles”. She started the campaign, with the work “Buchetiera” by Mihail Lipaty and the amazing transformation is due, among other things, to her mother, Mrs. Floarea Calotă, and her impressive collection of popular costumes.

The second interpretation came on the opening of the exhibition “Constantin Daniel Rosenthal. An artist at the time of the revolution”, Ioana transformed this time into Maria Rosetti, Rosenthal’s muse for the work “Romania revolutionara”.

“La Blouse Roumanie” NGO made a call on social media to find out if there is anyone in their community who has reproduced the Romanian traditional blouse. Following it, Mrs. Lucia Aionii from Arad county lent Ioana the garment, which was sewn by her, faithfully, according to the model in the work of art. 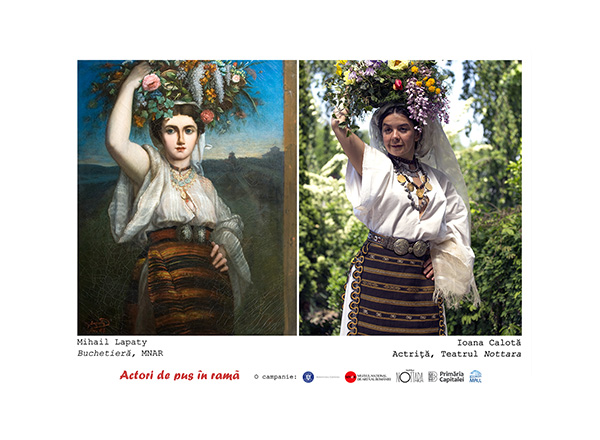 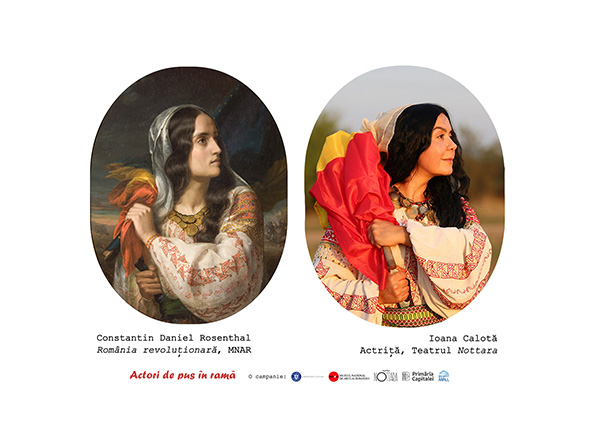 Ion Grosu shaved his head for “The Chess Player”

Ion Grosu had to “interpret” the work “The Chess Player, an emblematic painting for the creation of Corneliu Baba. For his transformation to be as close as possible to the original, Ion Grosu shaved his head. A beautiful tribute to one of the most interesting and appreciated Romanian painters of the  second half of the 20th century. 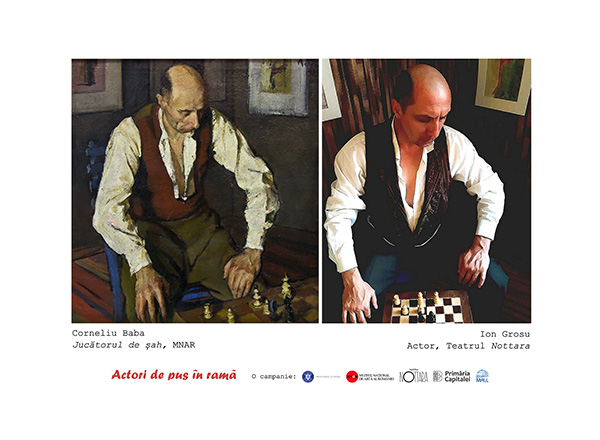 Filip Ristovski asked for something hard to do… and that is exactly what he got.

When Filip Ristovski joined the project, his desire was to reinterpret a work of art as complex as possible. As you can see in the picture, his request was respected, but the result was more spectacular than anyone could have imagined.

What is more surprising is that Philip already had in the house a lot of the necessary materials which is unknown at the time the work was chosen for him.

We therefore invite you to Bucuresti Mall to take a close look at this incredible reproduction and the richness of details that make it up.

PS: We also want to mention the involvement of the scenographer Delia Ristovski, wife of Filip, who performed the scenography, makeup, costume and photography. 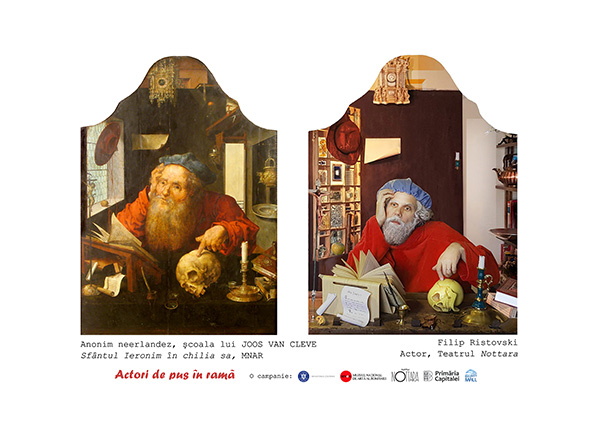 Dan Nasta, the bridge between the museum and the theatre

Online, the campaign ended with the reinterpretation of the Hariton Twig for “Woman in A Blue Dress”. The painting was specially preserved for the finale due to the special deck it creates between the museum and the theatre.

Not because of the young woman portrayed, because we don’t even know her identity. Nor thanks to the author because he is also anonymous. It is because of the person to whom this painting belonged: Dan Nasta (1919-2015), well-known actor, stage designer and director, as well as a passionate art collector, who has collected hundreds of objects with his wife throughout his life.

Some of these, 769 to be exact, were donated to MNAR by Mihai and Elena Nasta, his grandchildren, and since 2009 can be admired in the permanent collection Dan and Liana Nasta at the Museum of Art Collections. 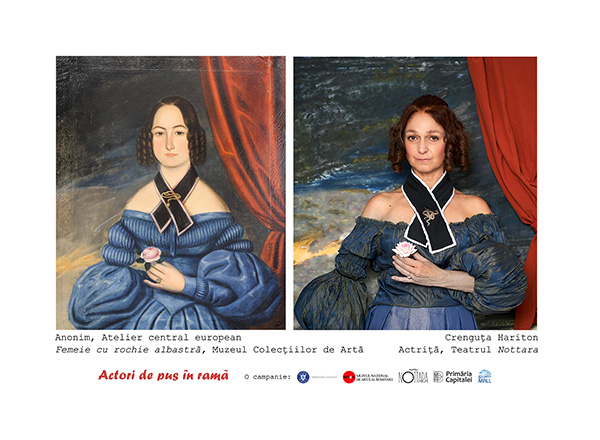 And if we have piqued your curiosity with this information “behind the scenes”, we remind you that you can see the exhibition in Bucuresti Mall until November 8th. The original works await you at the National Museum of Art of Romania.